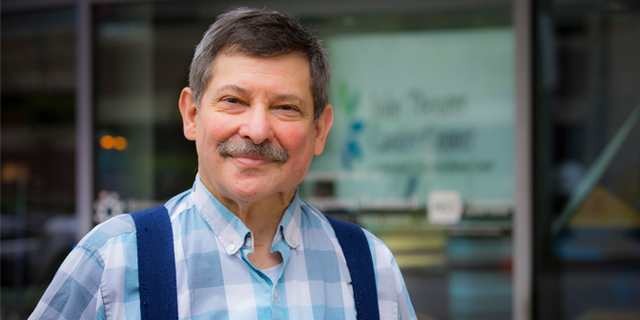 In 2009, when Michael Masterson of Budd Lake, New Jersey, was working full-time as an electrical engineer, he noticed something odd: His jaw felt numb. He visited his dentist to find out what was going on, and his dentist referred him to an oral surgeon. The oral surgeon ruled out several conditions before telling Michael, then age 55, something he never expected to hear.

“He told me he thought I had multiple myeloma, and I would need a jaw biopsy to confirm it,” Michael says. “He also told me that most patients with multiple myeloma have a very poor prognosis and don’t live very long—maybe 18 months.”

Multiple myeloma is an incurable type of blood cancer that affects the plasma cells located in the bone marrow, which play an important role in the body’s immune system. It can manifest in many different ways, including broken bones, anemia, kidney problems, infections and other intensely painful symptoms.

“My primary care provider told me that I needed to find a good oncologist and gave me the name of Dr. Siegel at Hackensack University Medical Center,” Michael says. “That turned out to be excellent advice.”

David Siegel, M.D., founding director of the Multiple Myeloma Institute at Hackensack’s John Theurer Cancer Center (JTCC), is one of the nation’s leading experts on multiple myeloma. Dr. Siegel has been a lead investigator on numerous clinical trials, including trials for medications that are now considered the standard of care for patients with multiple myeloma. In collaboration with his colleagues at JTCC, Dr. Seigel continues to engage in pioneering research to find new therapies for multiple myeloma and other blood disorders.

“Dr. Siegel’s group got me scheduled right away for an appointment, which was the start of my myeloma journey,” Michael says.

When Michael initially went to JTCC for his appointment, his team recommended treatment with several medications—including an anti-cancer drug known as a proteasome inhibitor—and a 15-session course of radiation therapy. Under the guidance of Dr. Siegel and David Vesole, M.D., Michael responded well to his treatment.

“The team was very unified,” Michael says. “They all worked together and brought their diverse expertise, which was beneficial because each one might see a problem and a solution differently.” However, in 2012, Michael’s cancer returned, and he again needed to reassess his treatment options. His care team recommended a tandem stem cell transplant, or two transplants performed a few months apart.

Under the care of Michele Donato, M.D., chief of the Stem Cell Transplantation and Cellular Therapy Program at JTCC, Michael’s transplant was a success, and he went into remission.

CAR-T cell therapy involves harvesting T-cells from the patient’s blood and “energizing” them in the lab to find and kill cancer cells before transfusing them back into the patient’s body.

“Participating in this clinical trial was a great option for me,” Michael says. “I knew the extra time involved in participating in the trial would pay off, and it would also advance the future of medical science.”

Before his CAR-T treatment, Michael’s care team did everything possible to prepare him.

“My doctors outlined everything, including what the procedure involved and what I could expect,” Michael says. “I also bought an exercise bike so that I could get into the best possible shape. My research nurses were key to getting me prepared for CAR-T, as well as the entire JTCC myeloma research nurse team. They handled a staggering amount of work behind the scenes.”

When the day of treatment arrived, Michael received a transfusion of 450 million T-cells, and his body responded very quickly.

“Right after the procedure, I had a few days of a fever, but that indicated that the treatment was working,” Michael says. “Overall, the procedure was very tolerable and I recovered rapidly.”

In 2021, nearly three years after his CAR-T procedure, Michael remains in remission.

“My CAR-T experience gave me excellent results, a rapid recovery and a return to normal life, which included being back to work only a few weeks after the procedure,” Michael says.

Throughout his journey, Michael said the support of his care team—as well as the support of his wife, Dawn, and his two daughters—helped him maintain a hopeful and positive attitude. And he has seen firsthand the tremendous strides that JTCC has made in treating blood disorders over the years.

“When I was first diagnosed in 2009, there weren’t as many treatment options for multiple myeloma,” Michael says. “I am always nudging my treatment team, but I always find that they’ve already raised that bar. They are continuing to work on more new therapies to help people with blood cancers and disorders.”

Today at age 66, Michael is feeling well and enjoying semi-retirement.

“I’ve been in remission for two years, so let’s go for three,” he says.