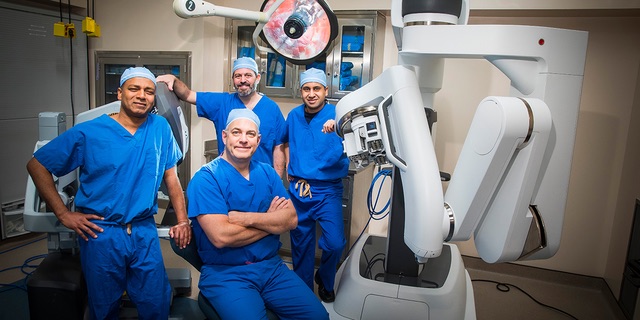 A renowned center of excellence in robotic surgery since 2001, Hackensack University Medical Center isthe first and only site in the Northeast to offer single port robotic surgery for bladder cancer. The single port robotic radical cystectomy —a procedure to treat bladder cancer by removing the entire bladder —is performed through a single three-centimeter incision using the da Vinci SP® Surgical System. In 2019, Mutahar Ahmed, M.D., director, Urologic Bladder Cancer Program at Hackensack University Medical Center, completed 15 single port robotic radical cystectomies since then, establishing him as one of the most experienced surgeons in the world at performing this highly specialized procedure. “We have one of the highest volume robotic cystectomy centers in the country. Now we have added the single port surgery to our repertoire, which allows us to provide state-of-the-art care to our patients,” said Dr. Ahmed. Radical cystectomy is one of the most complex urological surgeries. In addition to removing the bladder, surgeons need to perform urinary reconstruction to create a new way for urine to collect and exit the body. Most radical cystectomies at other centers are still performed using traditional open surgery techniques, which involve a 12-to 15-inch abdominal incision. Robotic cystectomies have been shown to provide cancer treatment that is just as effective as traditional open surgery, and the benefits include less discomfort, shorter hospital stay, faster recovery, and improved cosmetic results for patients. In the past five years, Hackensack University Medical Center urologists have performed more than 250 robotic cystectomies. The hospital’s urological surgeons are now performing between 60 and 70 robotic cystectomy procedures each year —which is the highest annual volume of robotic cystectomies performed at any hospital in New Jersey.