Skin Cancer: Putting Her Trust In Others 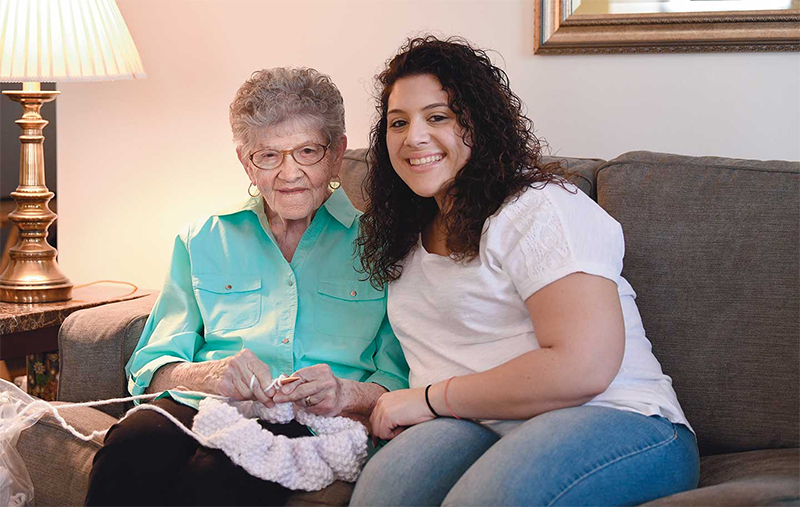 Some of Kayla Romero’s fondest memories include tagging along on her grandmother’s weekly beauty salon appointments. When Kayla was a little girl, her grandmother, Joan Earle, looked after her while her mom worked. Joan, now 86, has never been simply “Nana” to Kayla. “She’s been like my partner,” 23-year-old Kayla says.

Sometimes, Joan treated her granddaughter to her own salon hair treatments. “It was fun sitting next to her, feeling so grown up,” says Kayla.

These days, the tables have turned. Though Joan still gets her hair washed and styled weekly, it’s now the granddaughter looking after the grandmother. But don’t tell Kayla that. “[Nana] still takes care of me!” she insists.

So naturally, it was Kayla who made sure Joan took care of the scab-like mark on her scalp. Joan had noticed it while brushing her hair before Kayla spotted it, but didn’t think much of it: She’d had shingles a few months earlier and she attributed the lesion, as well as several on her face and back, to the virus returning.

But when Kayla saw the mark, her eyes widened. She urged Joan to get checked out. “My Nana can be stubborn, and she’s not a fan of going to a lot of doctors,” Kayla says. Luckily, fate intervened. “Nana loves her primary doctor Ellis Wilcox, M.D., so when she caught a cold she agreed to see him and ask him to take a look while we were there.”

Joan’s primary care physician examined the lesions and sent her straight to the office of Adriana Ros, D.O., director of the Dermatology Residency Program at Palisades Medical Center. Joan was hesitant to see a new doctor, but along with her son William Earle and daughter Doreen Romero at the appointment, she became comfortable with Dr. Ros right away. “Many health care providers only talk to the caregivers, but Dr. Ros talked directly to me,” says Joan.

There’s a good reason for that. “I want patients to trust and have a connection with me,” Dr. Ros says. “They need to feel comfortable enough to tell me what’s bothering them.” For Dr. Ros, it’s more than just medicine. “I have a lot of patients like Joan who have gone through a lot and survived,” she says. “There’s so much they can teach us, and I give them a lot of respect for that.”

When Dr. Ros assessed the lesions, she immediately suspected skin cancer. She performed three biopsies—one from Joan’s scalp and two from her face—which came back as basal cell and squamous cell carcinomas, the two most common types of skin cancer. If left untreated, they can invade the surrounding tissue and grow into the nerves and bones or grow deep in the skin, causing damage and disfigurement.

Skin cancers are common, particularly in people who were exposed to the sun for years. “When Joan was growing up, people used oils and reflectors to tan,” says Dr. Ros.

Because of the size and location of the lesions, the doctor recommended Mohs surgery. This intricate surgery is done in stages, allowing the surgeon to remove skin cancer in layers, and then examine the tissue under a microscope until they reach clear margins. While Mohs surgery is more complex and time-consuming than other methods, it has a high cure rate and spares the most healthy tissue, leaving the smallest possible scar. Dr. Ros sent Joan to her colleague David Ciocin, M.D., for the surgery.

Joan and her family prepared to brave the battle. This wasn’t Joan’s first clash with cancer. Almost 15 years before, Joan was diagnosed with Hodgkin’s lymphoma. After 18 months of chemotherapy, she was declared cancer-free. Back then, she was upset to lose her hair, and this time was no different.

“Getting her hair done is her treat for the week,” says Dr. Ros. Unfortunately, because of the size of the scalp lesion, part of Joan’s hair did need to be shaved. And while the surgery went well, she developed an infection afterward. But with painstaking and meticulous care, Dr. Ros was able to clear it.

It was tough for Joan to accept help. For so much of her life she was the family caretaker. She’d raised three children—one of whom had muscular dystrophy—and she likes being in charge. Joan is the eldest of three and always took care of her aging parents as well as her husband before they passed away. But after a lifetime of helping others, it was time to accept help for herself.

Over the next few months, Joan needed several more skin cancers removed. Because of their sizes and locations, Dr. Ros was able to remove them with curettage and electrodesiccation. In this procedure, she scraped the spots with a special spoon-shaped instrument, then treated them with an electric needle to destroy any remaining cancer cells.

Joan will need regular follow-up now, seeing Dr. Ros at least every six months for the rest of her life. As for her hair, it’s grown back and she’s returned to the salon for her weekly visits, sometimes even with Kayla in the next chair.

7 Myths About Tanning and Sun Exposure