Against the Odds, a Baby Diagnosed with Fatal Malformation of Skull Survives Seven Months and Counting 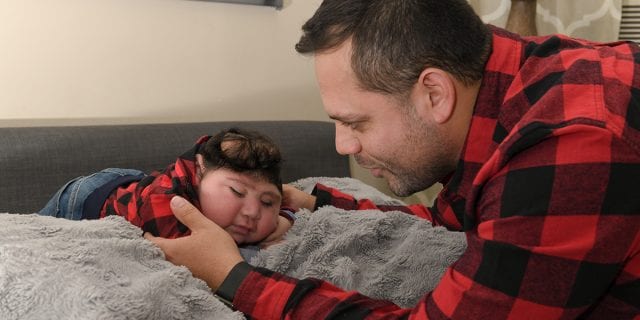 Presented with a life-threatening case of exencephaly, a team led by Tim Vogel, M.D., director of Pediatric Neurosurgery at the Hackensack Meridian Health Joseph M. Sanzari Children’s Hospital at Hackensack University Medical Center, performed a rare and delicate procedure on a five-day-old baby to address brain tissue growing outside of the skull.

During the pregnancy, the child did not present with any other comorbidities such as a heart defect or lung issue which is typical for babies with exencephaly. At 35 weeks, the patient’s head had ceased growth. Labor was induced and the child was born 5 weeks early. The baby survived the birth and was breathing with no signs of distress and was able to bottle feed.

The surgery was extremely risky as medical literature suggests that there’s never been a baby to survive more than three hours post birth. The child was intubated without complications. Dr. Vogel removed any necrotic tissue and preserved the viable brain during the 5-hour surgery. The patient was sent home after less than two weeks and is thriving. At one year old, he will have another surgery to create a skull that will protect his brain tissue.

As one of the premier pediatric neurosurgeons in New York, New Jersey, and Philadelphia, Dr. Vogel is a sought-after presenter at international medical conventions. He holds several medical patents and has published numerous papers in several top science journals.