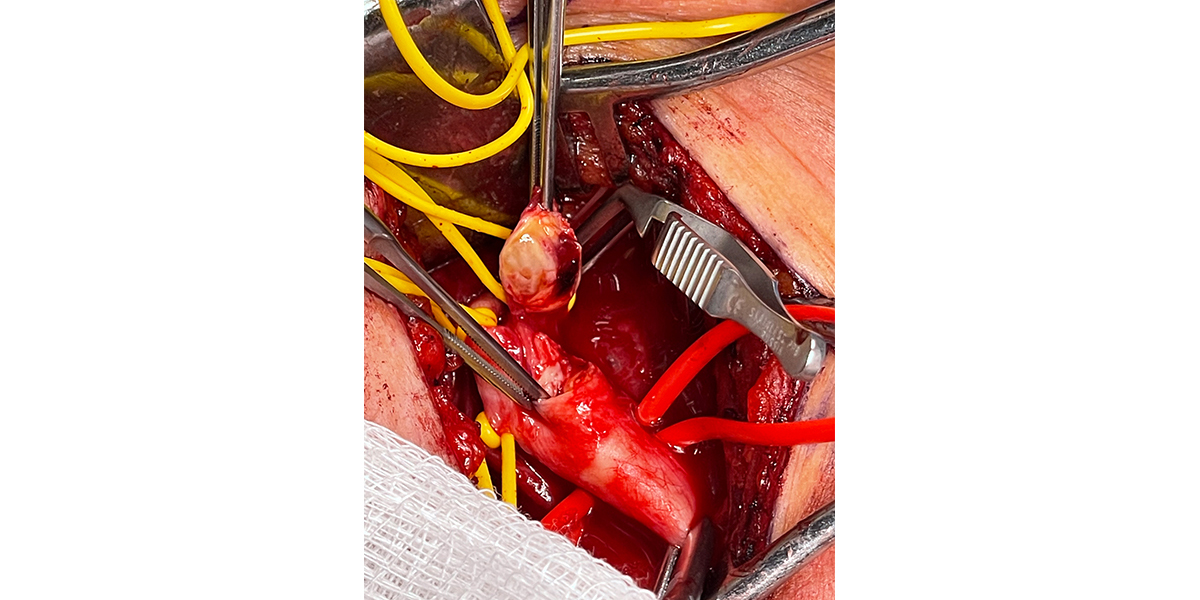 When a 68-year-old male with internal bleeding presented with stroke and stroke-like symptoms, a hospital evaluation determined that his left carotid artery was completely occluded—a diagnosis with no viable treatment. When this artery is completely blocked, it typically cannot be treated due to the risk of dislodging plaque and causing a stroke.

Strangely, the individual continued to present with repeated mini-stroke symptoms for a year, which is not typical of this condition. He consulted multiple cardiologists, including Bharath Sathya, M.D., a cardiac imaging expert from Jersey Shore University Medical Center. Suspecting that there may be a coexisting issue at play, Dr. Sathya sought input from a Jersey Shore University Medical Center colleague, vascular surgeon Vikalp Jain, M.D., for the unusual recurring TIA symptoms.

Because the individual also showed narrowing in the artery and an area of narrowing of the vertebral artery and some plaque in his aorta, which was notably unusual, the team prescribed blood thinner medication.

Dr. Jain reviewed the original diagnostic imaging, and suspected that the patient’s carotid artery was not, in fact, totally occluded. A skilled vascular lab technician ran an additional ultrasound, offering evidence that the carotid artery was actually 99% occluded with a tiny trickle of blood flowing through. Dr. Jain then ran an additional CAT scan with special focus on all blood vessels. This confirmed that that carotid artery was allowing a small amount of blood flow. It was not enough to adequately supply blood to the brain, but was enough to slowly drag small particles through the plaque into the brain, causing mini strokes.

This new information changed the diagnosis to a pathology so rare that Dr. Jain says most vascular surgeons won’t ever see in practice: carotid stump syndrome. The new diagnosis opened a treatment option. He ligated the internal carotid artery, which kept any blood from that artery from going to the brain and as a result, prevented the small debris that was embolizing from doing so. The patient's brain then, as it already was doing, relied on the other three vessels going to the brain.

Since this treatment, the patient is feeling much better and is no longer experiencing the mini-stroke symptoms. He is high functioning and even back to running his own business.