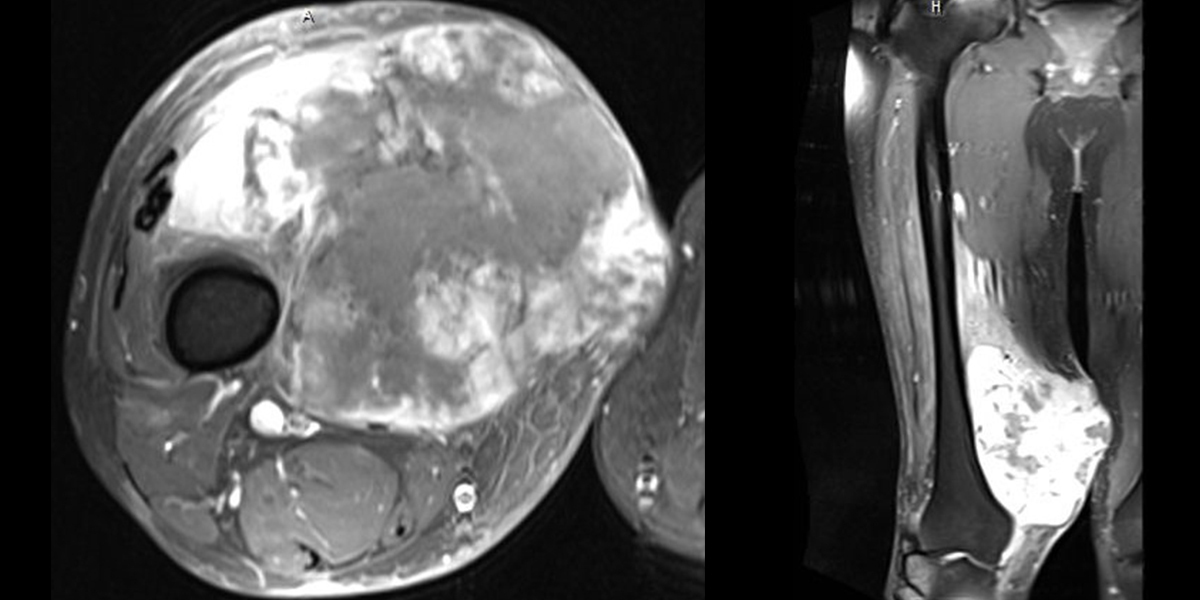 The Orthopedic Oncology service at Hackensack University Medical Center consists of Valdis Lelkes, M.D., and chief of the Sarcoma division, Francis Patterson, M.D., who together treat complex patients with both bone and soft tissue sarcomas. Hackensack University Medical center is a high volume sarcoma treatment center, and its staff work in conjunction with other specialists at John Theurer Cancer Center to provide these patients the expert care that they require. The Orthopedic Oncology service treats adult and pediatric patients with both bone and soft tissue sarcomas.

They recently treated a 26-year-old male with a large tumor involving his thigh and knee. He previously underwent surgery on the mass when it was much smaller and thought to be benign. The tumor recurred and grew to the point that it compromised the use of his leg, which led him to seek care at Hackensack University Medical Center. An MRI revealed a 17-cm soft tissue mass within the quadriceps musculature that nearly encased a portion of his femur.

The sarcoma team was very concerned that the tumor was cancerous, and a biopsy was performed in the office to expedite confirmation of his diagnosis. New technologies accessible at Hackensack University Medical Center were applied to pinpoint his exact diagnosis, including next-generation sequencing, a type of genetic testing performed on tumors to evaluate their gene profile. His tumor was identified as a rare type of soft tissue sarcoma, with a very specific gene fusion that confirmed the tumor type.

The team discussed with the patient how rare this tumor was; only four other cases have ever been reported in medical literature. At Hackensack University Medical Center, all patients with sarcomas are reviewed and discussed at the multidisciplinary sarcoma tumor board where each patient's care is personalized and planned in a collaborative effort between the orthopedic oncology team, medical oncologists, radiation oncologists, pathologists and radiologists to ensure that patients receive the best care possible.

After confirming he did not have any evidence of metastatic disease elsewhere in his body, he underwent limb salvage surgery to remove the tumor in its entirety. Limb salvage surgery can be complex after a patient has had a previous surgery when the tumor was not thought cancerous, but the sarcoma team was able to save his leg and remove the tumor with negative margins. The plastic and reconstructive surgery team at Hackensack University Medical Center work closely with the sarcoma team to assist in closing large wounds from tumor surgery. This patient's very large tumor resection required both a rotational flap as well as a free flap, which healed without issue.

The patient received external beam radiation treatment, as well as a targeted medical therapy for a gene mutation identified within his tumor cells to decrease his risk of recurrence and to decrease the risk of him developing metastases. The patient was able to walk again and has returned to work. He is able to continue living his life, with no evidence of cancer a year and half from surgery. This is one of many sarcoma patients successfully treated at Hackensack University Medical Center using the most cutting-edge technologies to provide patients the best possible outcomes.