When Layla Maloney was born in June 2020, the back of her head was a little flat, a common condition called plagiocephaly. Her mom,

Stephanie Maloney, had worked in childcare as a nanny and as operator of a daycare, so she had seen children with what is sometimes called “flat head syndrome.” She knew she’d have to watch it for a few months.

At four months, Layla’s pediatrician recommended she be fitted for a medical helmet that would help eliminate the flatness and shape her head. But after reviewing Layla’s brain scans taken in advance of a helmet fitting, the helmet technician thought Layla may have craniosynostosis and recommended Layla see a specialist. Her pediatrician recommended Thomas Steineke, M.D., a neurosurgeon and the chair of the Neuroscience Institute at JFK University Medical Center.

Craniosynostosis is a congenital anomaly in which the bones of a baby’s skull fuse together too early and can lead to major neurological complications, Dr. Steineke says. When the skull bones join together too early, the skull can become misshapen as the soft skull bones shape to the baby’s growing brain. The brain can also become compressed by the joined bones, which can restrict brain growth and lead to a build-up of pressure in the brain. The increased pressure results in a risk for blindness, seizures or brain damage.

In most cases, the cause of craniosynostosis is unknown. The Centers for Disease Control and Prevention says that about one in 2,500 babies are born with craniosynostosis in the U.S., and that environmental and genetic factors may play a role. Known risk factors include maternal thyroid disease and the use of a fertility medication called clomiphene citrate taken just before or early in the pregnancy.

Often craniosynostosis can be diagnosed with just a physical exam, but in Layla’s case, it required further evaluation. Dr. Steineke ordered x-rays, which showed that Layla had lambdoid synostosis, a form of craniosynostosis in which the suture at the back of the skull closes too early, flattening the back side of the head. It is one of the rarest types of craniosynostosis and requires surgery, a surgery in which Dr. Steineke and pediatric oral and maxillofacial surgeon Kayvon Haghighi, M.D., DDS, would need to remove the large plate at the back of Layla’s skull, reshape it and replace it. It’s a six-hour surgery with a risk of life-threatening bleeding.

Learning that their baby girl needed a six-hour surgery that would require removing and replacing parts of her skull was frightening for Layla’s parents. But Stephanie felt that Layla was in good hands with Drs. Steineke and Haghighi.

“I could say a billion good things about both of them,” she says.

The doctors took the time to explain the procedure, answer questions and build personal connections with Stephanie and her husband, Shaun, so they felt as comfortable as possible about the care their daughter would receive. Dr. Haghighi even shared his personal story about his own child’s major surgery.

Following the end of surgery in January 2021, Layla stayed at JFK University Medical Center for three nights. Because of COVID-19 restrictions, only one parent could stay at a time. Given the challenges of juggling schedules and caring for their young son at home, Shaun stayed the first night and Stephanie the remaining nights. It was tough for them both not to be together with their daughter.

But Stephanie says the nurses were “wonderful,” taking care not just of Layla, but of her, too. They brought her food and coffee, rubbed her back when she needed comforting and stayed with Layla so she could grab a quick shower or use the restroom.

“It was so emotional,” Stephanie says. “A nurse cuddled Layla for me so I could feel human again for a second. If I needed to go to the bathroom, even for two seconds, they would just sit by her, so she wouldn’t be alone.”

At home, after-surgery care was pretty simple—just wound care and trying to limit her movements. “For six weeks after surgery, we were basically like super helicopter parents,” Stephanie says. “We wouldn’t let her even sit on the floor by herself in case she toppled over.”

Layla won’t need a medical helmet or any kind of therapy, and while she will continue to see Dr. Steineke for follow-ups, it’s mostly monitoring her brain and skull growth. At nearly 1 year old, Layla is acting as herself and is completely on schedule developmentally. 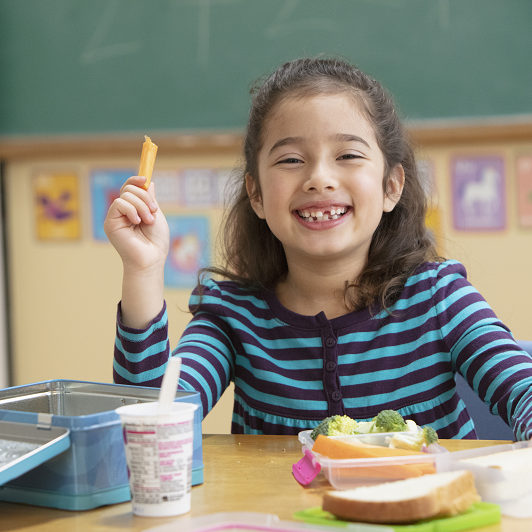 Here’s the ultimate list of healthy and easy snacks that you can pack for your kids in their lunchbox for school.

4 of the Most Common “Tummy Troubles” Kids Have 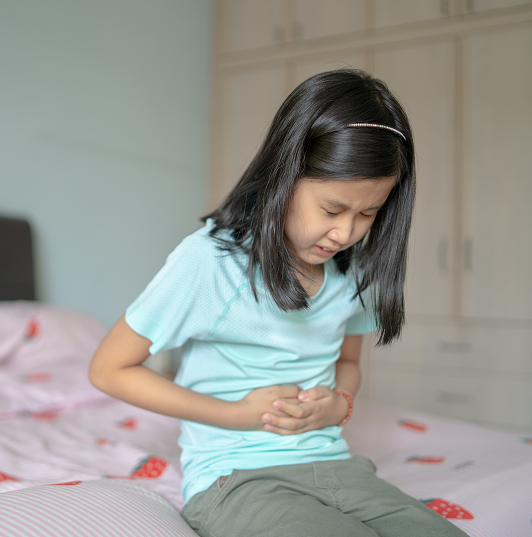 As most parents of young kids know, gastrointestinal issues in kids are common. Our doctors break down four possible culprits.