Family Support Through a Heart Attack 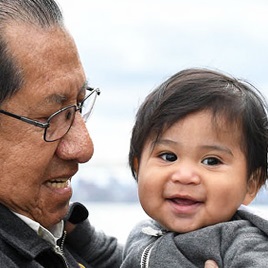 December 2018 was a busy and exciting month for 74-year-old Legrand Castro and his family.

On top of the typical holiday festivities, Legrand was eagerly awaiting the arrival of his daughter Diana’s first baby—his fourth grandchild—due in January.

One December day, Legrand was on his way to one of his many social activities in Paterson, New Jersey, when he started feeling faint. No stranger to heart problems—he previously had three heart attacks—he quickly decided to return home. His son-in-law called 911, and Legrand was taken to his nearest hospital by ambulance, where it was determined he was having another heart attack.

“I remembered the symptoms from previous heart attacks,” he says. “I was in pain and felt faint, like I was going to pass out.”

Once at the hospital, his condition deteriorated. A stent was implanted in the cardiac catheterization lab, but his blood pressure dropped and he went into cardiogenic shock, a life-threatening condition where the heart isn’t able to pump enough blood to the organs. David Silber, D.O., a heart failure cardiologist who practices at Legrand’s local hospital and at Hackensack University Medical Center, inserted a small device into his groin to help blood flow and stabilize him, but it wasn’t a long-term solution.

“The device was helpful to him, but it was also problematic because it’s in the groin, which meant he couldn’t get out of bed,” says Mark Anderson, M.D., chief of the Division of Cardiac Surgery at Hackensack. Because his condition wasn’t improving enough, Dr. Silber and Dr. Anderson agreed he should be transferred to Hackensack for advanced care.

At Hackensack, the Impella 5.0® heart pump was inserted to temporarily support Legrand’s heart. It served as a temporary bridge that kept him alive until a permanent solution could be implemented. This device efficiently pumped blood through the body, so Legrand’s heart could rest.

“The goal was to optimize him for his next surgery. We needed to get him back to baseline in preparation for the procedure, which was a durable implantable left ventricular assist device. With the LVAD, the patient can be discharged and live for years,” Dr. Anderson says.

What Is a VAD?

As VAD coordinator and heart failure APN, Scott Stewart, DNP, APNC, CNL, works with patients from the beginning, when they are first identified as VAD candidates, through surgery and on to living with the device.

“LVAD patients are able to go back to work, go to their grandchildren’s weddings, travel—pretty much anything any average patient can do, except some water activities,” Scott says. “This truly is the new wave of heart failure treatment and is setting the standard for giving patients back their quality of life, something that they may not get with traditional therapy.”

Despite the good outcomes associated with LVADs, Legrand was hesitant. “He didn’t want the therapy initially. Like many patients, he was having a tough time grappling with needing this mechanical pump to power his heart,” Scott says.

Legrand was worried he wouldn’t be able to do the things he enjoyed with an LVAD attached to him, but a meeting with another LVAD patient helped put his mind at ease. “He was very open with me and lifted his shirt to show his scars,” Legrand says. “He explained he’s living his life, and [the LVAD] isn’t holding him back.”

This peer support is a vital part of the VAD program at Hackensack. Every patient undergoing evaluation for a VAD meets a current patient who has the device implanted.

This meeting encouraged him, but Legrand was still scared. The LVAD required open-heart surgery, which was much riskier than his previous procedures. “He was really fragile, and he worried he wouldn’t make it through the surgery,” Diana says.

Despite his fear, he knew he had a lot to live for, with a loving family supporting him all the way. “I knew the baby was coming and I wanted to meet the baby, so [that motivated me],” Legrand says.

An infection and gastrointestinal complications delayed Legrand’s LVAD surgery by a couple of weeks, bringing it to just a few days after Diana’s scheduled C-section. After his grandson was born on January 18, 2019, Legrand excitedly shared photos with nursing staff and prepared for his own big day: his LVAD surgery on January 21. “First it was my turn, and then he was next,” Diana says. “We tried to keep him strong and motivated by telling him that the baby is here now and safe, and I’m safe. ‘Now you do what you have to do and come back home, so you can be with the baby.’”

Back on His Feet

“It was a collaborative effort to get my dad back on his feet,” Diana says. “We were fortunate to have such a great team behind us. Dr. Silber, Dr. Anderson and Scott were phenomenal, and they continue to be his number one supporters.”

The value of family support during a health crisis is undeniable, and Legrand was surrounded by his wife, children, grandchildren and extended family, who kept up his spirits while also helping Diana during her final weeks of pregnancy. Diana especially credits her mother, Victoria, with giving Legrand the support he needed to keep going. “She’s the one who pushed him to walk and to do things for himself,” she says. “My mother made sure she was at my bedside while I was giving birth and with my father during his surgery, even though we were at different hospitals. She’s really the strength of this household.”

Since receiving LVAD therapy, Legrand says he’s feeling better than he did before the heart attack. “I feel good. I breathe better now and don’t get tired like I used to,” he says.

And he’s back to doing the things he was worried he wouldn’t be able to do with an LVAD, like attending social events, dancing, fixing up the house and spending time with his family. This past summer he was laying cement pavers with his son David and painting windowsills with his wife.

And as a part-time babysitter, he’s also getting plenty of time to play with the grandson who helped pull him through to recovery.

“Legrand can go back to dancing with his wife and playing with his grandkids, and that’s what this therapy is for,” Dr. Silber says. “It’s your second chance, your second birthday.”