A Chance for Survival for Newborn 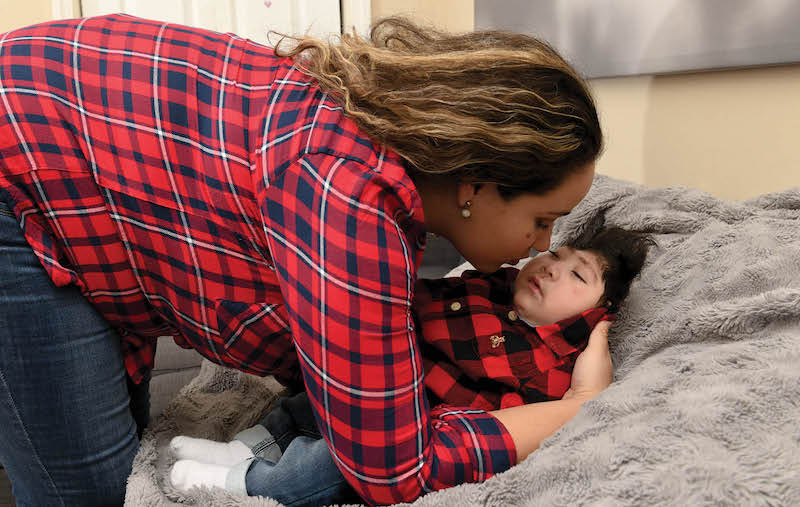 Lucas Santa Maria is a happy 7-month-old boy. He recently started eating rice cereal and baby food, is excitedly trying to crawl and already demands 12-month-size clothing. He is developing well, meeting all the big milestones just like any other boy his age.

Except that he only has half a brain.

In fall 2018, Maria Santa Maria, a loving mother of three young girls in Garfield, New Jersey, was thrilled to discover she was expecting again. But at her 12-week ultrasound, she received devastating news: The baby’s brain was growing outside of his skull, and he would likely not survive pregnancy.

This condition, known as exencephaly, is caused by a rare neural tube defect. That means the developing brain is exposed to amniotic fluid and other damaging complications in the womb. Until Lucas, there were no known cases of survival.

When her doctor delivered the news, Maria was alone in the exam room. Her husband, Augusto, was at work, and her sister-in-law, who accompanied her to the appointment, was in the waiting room corralling Maria’s 2-year-old daughter.

Her doctor explained what was happening and presented some options. “Never before had I considered terminating a pregnancy,” Maria says. “And suddenly I was scared and sad and forced to think about it all by myself. But I just knew that it was not something I wanted to do.”

She left with a heavy heart. She scoured the internet for stories like hers. She wanted to hear stories of survival, stories of hope. But she found very little.

So, as a family, they decided to continue with the pregnancy and make the call if and when things got worse.

A Glimmer of Hope

But things never got worse. Maria’s pregnancy was normal, and the baby continued to grow.

Meanwhile, Maria’s obstetrician, Daniel Hakimi, D.O., sought a second opinion from Abdulla Al-Khan, M.D., director of the Division of Maternal-Fetal Medicine & Surgery and the Center for Abnormal Placentation at Hackensack University Medical Center. After an uneventful pregnancy, now in her third trimester, Maria was back at the hospital to figure out her baby’s next steps, most of which involved some sort of end-of-life care.

Timothy Vogel, M.D., director of pediatric neurosurgery at Joseph M. Sanzari Children’s Hospital, heard about the Santa Marias’ case from a colleague. “I said, ‘Tell me more about the case. Maybe there is something we can do,’” Dr. Vogel recalls.

After reviewing the case, Dr. Vogel explained to the family that if Lucas survived birth, and he was showing promising signs, they could possibly create a surgery that would spare his healthy brain tissue from the non-functioning tissue—and put him on a path to thrive.

Maria felt a glimmer of hope. At 35 weeks pregnant, doctors induced her. On a Thursday morning, March 7, 2019, she gave birth to Lucas, who weighed 6.5 pounds and was 19 inches long.

“He seemed like a perfectly healthy baby boy, other than his head,” Maria says. “His head looked like a big balloon, and the skin was almost clear on the top.”

Unsure of how much time they’d have with Lucas, Maria and her family sat with him, sang to him and surrounded him with love for the next few hours, rather than rush him to the neonatal intensive care unit (NICU).

Hospital staff came in periodically to check on everyone and to discuss comfort care options.

Maria’s daughters, who all knew about their brother’s chances, painted handprints on pillowcases for the baby since they were unable to hold him.

Visitors trickled in to meet Lucas and comfort the family, and a professional photographer took photos of the Santa Marias as a beautiful family of six.

“We knew we probably wouldn’t have long, so we even called a funeral home to make arrangements,” Maria says.

But Lucas showed no signs of distress. He was breathing on his own, he urinated and he even ate a little bit.

“If he didn’t eat anything when we tried to feed him, we were going to have to put in a feeding tube. But he drank the whole bottle,” Maria says.

Dr. Vogel said Lucas was ready for surgery. He seemed strong enough to withstand the procedure and his head was swelling, so it was time. But there was another problem: This surgery had never before been done. “We had to invent a surgery,” Dr. Vogel says. “There was no roadmap or literature that says how to repair this.”

He and his team pooled their knowledge in anatomy, neuroscience, anesthesiology and more to design and execute a six-hour surgery that involved removing part of Lucas’s skull, draining the fluid build-up and removing all necrotic brain tissue—all while preserving the spinal fluid cavity, healthy brain tissue and blood vessels to avoid a stroke.

“I was crying because it felt like maybe everyone else thought it was useless, but I wanted to still do it. He was doing so well,” Maria says. “At first we chose comfort care, but his chances were improving, so we wanted to keep going. They told us he could die any step of the way, but we wanted to try.”

No Signs of Slowing Down

Incredibly, the surgery was a success. In the NICU, Lucas received a round of antibiotics and was doing well enough to go home only a few days after surgery. He was discharged with hospice care, but he shows no signs of slowing down, even now at 7 months old.

“He’s the easiest hospice patient because he never needs anything,” Maria says. “He’s just a normal, healthy baby. He sleeps a bit more than most babies, but he’s always on the go with me, taking his sisters here and there.”

Since the surgery, bone is starting to form a protective layer around his brain, and the scalp has grown over it, complete with hair. Lucas is thriving, Dr. Vogel says, but as the first to survive this condition, no one is sure what the future holds.

“His future looks promising, but there’s nobody like Lucas,” Dr. Vogel says. “Right now, he’s doing everything we’d hope he could do, but we’ll keep an eye on him as he develops.”

Lucas will likely need another surgery when he is 18 months old, but for now, he’s just a happy, chubby baby who’s adored by his three big sisters and parents. 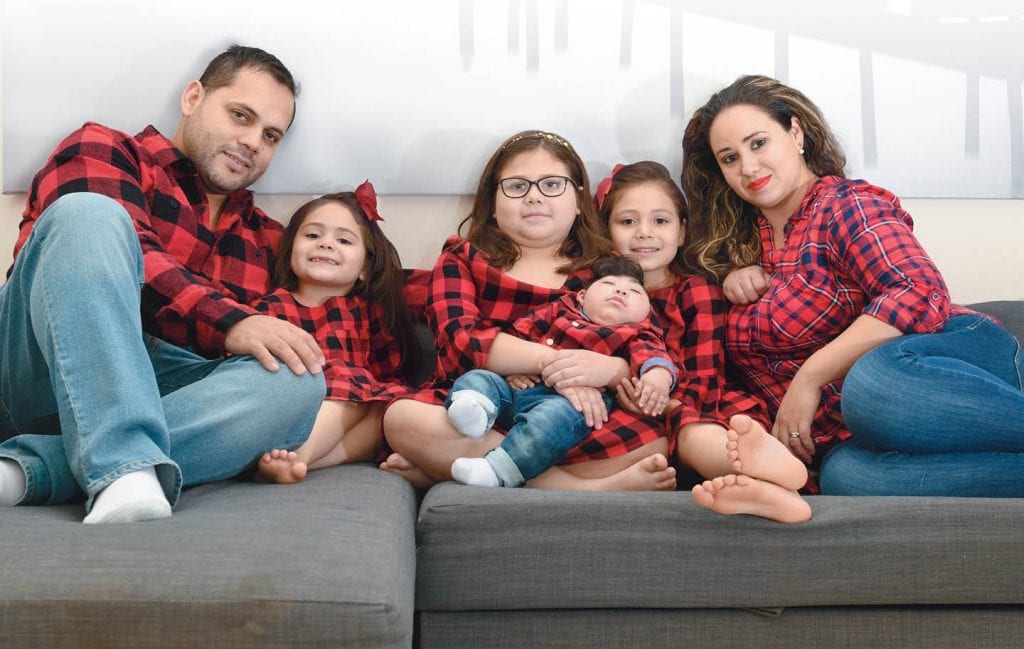 “I never found hopeful stories when I was looking, so I want our story out there,” Maria says. “Nothing was expected of this child, and now here we are. I want everyone to know that miracles do happen.” 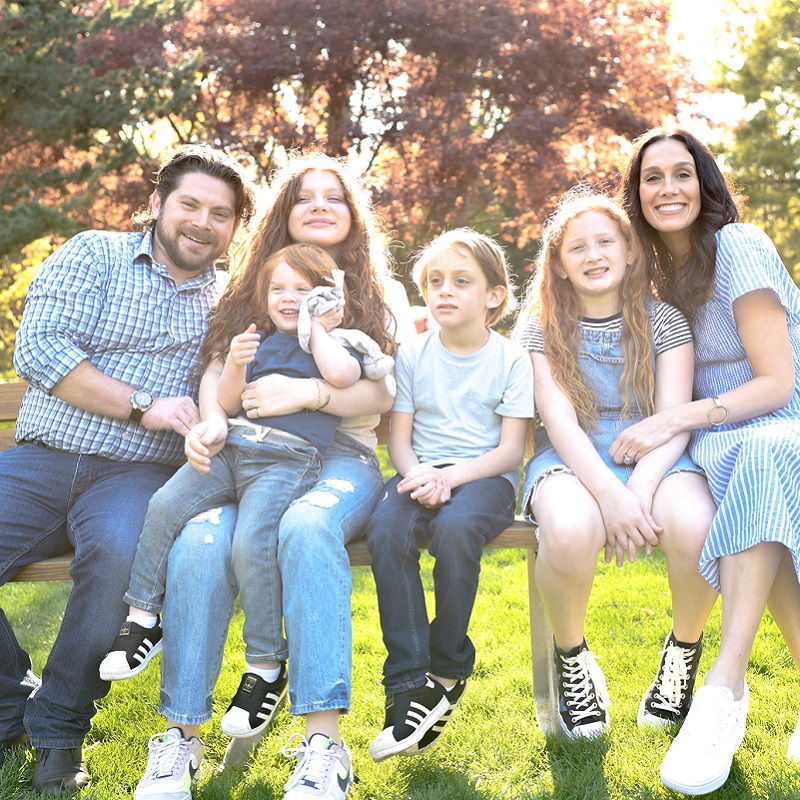 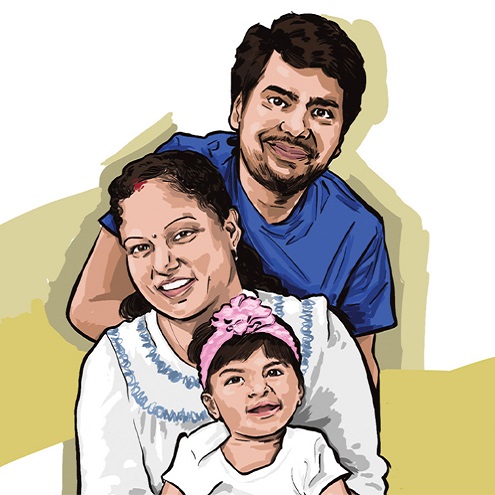